In today’s day and age, people are bombarded with adverts, from the moment they wake up to the moment they go to sleep. Advertising has become so commonplace that many brands are now overlooked or even ignored. The sheer amount of competition means It’s becoming increasingly difficult for brands to stand out.

However, some creative minds out there still pull off some truly innovative campaigns. In order to celebrate originality and imagination, we turned our attention to the past, going back 70 years to pick our favourite campaign from each decade.

So, without further ado, here’s part one of our list:

You would think proposing with a diamond ring is a ritual as old as time. Wrong. Surprisingly, it’s a fairly new tradition, created by jewellers De Beers in the 1940’s.

De Beers had a problem on their hands: how do you sell a rock? Diamonds are essentially rocks, and rocks are easy to come by. They responded with one of the most famous slogans of all time: “Diamonds are Forever”. De Beers convinced society that a diamond, like a strong relationship, will last forever. A diamond is a true symbol of eternal love.

Even more clever, was how De Beers also advised their audience exactly how much to spend on the diamond. They started with ‘one month’s salary’ in the 1930’s then brought it up to two month’s in the 1980’s. Their justification? “Isn’t two months’ salary a small price to pay for something that lasts forever?”

The genius in De Beers’ campaign is the way they created a demand that didn’t exist before, and now as a result giving a diamond ring will be forever known as a marriage gesture.

In the 1950’s, car advertisements featured happy families with their beautiful, streamlined cars. Volkswagen took a different approach. Rather than sell the appearance of their frankly unattractive VW Beetle, they sold its practicality. Copywriter Julian Koenig brought the piece to life with his honest writing. The copy for one of the “Think Small” advertisements reads: “Presenting America’s Slowest Fastback. There are smoke new cars around with very streamlined roofs. They are not Volkswagens.”

“The VW engine may not be the fastest, but it’s among the most advanced. It’s made of magnesium alloy (one step better than aluminium). And it’s so well machined you may never add oil between changes”

This ad admits the VW is unattractive and slow, but nevertheless converts this into a positive. The car is practical, is unlikely to run out of oil between changes and lasts a long time. This ad nailed its target audience, not trying to appeal to adrenaline junkies with money to burn, but instead to average Joes.

When you’re up against a leading brand like Coca-Cola, you have to do something memorable to persuade consumers that your product is better. Pepsi did just that.

Slogans such as “Sociables prefer Pepsi” positions drinking Pepsi as a communal event, enjoyed by many people at the same time. Clever, as Pepsi not only portray themselves as the “cool” drink, but target people who will buy more than one bottle.

Whilst Pepsi and Coca-Cola are still both hugely popular in the present day, Pepsi certainly raised their brand awareness and convinced consumers to choose their product as an alternative.

Launched in the 70’s, Burger King’s “Have It Your Way” campaign encourages individuality, as well as excellent customer service. The slogan reminds consumers that customisation is always an option at Burger King.

Setting themselves apart from other competitors, Burger King are suddenly no longer selling burgers, but rather selling the idea you can have what you want; a much more appealing concept. This concept has lasted all the way to the modern day, with a 21st century update to “Be Your Way” to fit with the brand’s current image.

Thanks to Laura for all her hard work during her 2 weeks of work experience. We got her a little present as a...

Christopher Cox, the man behind the design blog changethethought, has been busy creating lovely posters throughout the 2008 Presidential Election in support of... 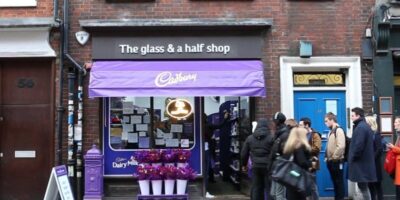 From screen to street. Do real-life brand experiences make a difference?

We really are in an age of ‘experience’. A steady decline in high street fortunes at the end of last year highlighted perfectly...