The Visualiser: Long Live the Marker 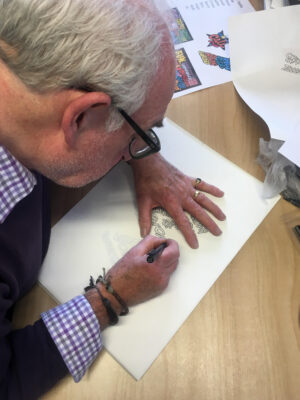 My school holidays in the 80s were generally spent in Manchester, sitting at the end of my dad’s desk and watching him draw. He was a visualiser and they were the guys who drew anything and everything; including all the layouts for press. From a boiling kettle to an action packed skydive, you name it, they drew it. They were extremely talented people.

With the introduction of Macs and stock libraries, the life of a visualiser became pretty tough as you can imagine. With all this technology, was there any need for them any more?

A lot of today’s modern talent don’t even know what a visualiser is!

Spark still uses my pops to do all types of things for the agency because he’s one of the best.
It still amazes me the speed in which storyboards can be done by hand and the ability to change and adapt things isn’t as tough as you’d think. But it’s not just storyboards, it’s hand typography, concept layouts, wall murals, scamps and more.

I guess you could call the new generation of illustrator the new visualiser?

Now, don’t get me wrong, I love macs and what they can produce, but I still am a huge fan of the marker. The amount of clients that have asked if they could frame the visual or if they could use JUST the visual for the ad still amazes me. And the amount of Sparks who will stop whatever they are doing to watch my pops in action always fills me with pride.

Their tricks of the trade are so cool from the way they use trays to shadow and Tipex pens to highlight; the multi layering can still create great effects.

My dad’s old MD, Mel Harding, told me once at a First Friday Club dinner that back in the day they used to have a marker monitor to stop people just walking in and using them because they cost too much money. They also had a staff member who would walk round every hour and put the tops back on the pens to stop them drying up! It was a fine art that cost thousands of pounds which meant the agencies back then were few and far between.

I hope that there is a new generation of visualisers out there, keeping the torch lit for an incredible art that kick started agency life.

Here’s an interview with the man himself, Ralph Marra: https://www.youtube.com/watch?v=NBaWCeutgDc&t=4s

Everyone loves a Tri-er: Spark vs Cancer

On Sunday 14th May, three of our very own Sparks will be giving it their all at the Wilmslow Triathlon to raise £1K...

We've just said goodbye to Hakim who's been spending time with us on placement. Here's what he had to say on his time...

Photography from Move Lachine. He's fascinated by life in metropolitan areas, surrounded by millions of other people. The city he loves most is...